You are here:
DoMicro news 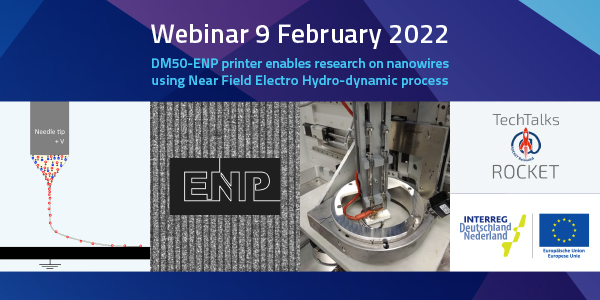 On 9 February 2022, Marcel Grooten presented the E-Nanoprint-Pro project in the TechTalk, organized by the RocKET Reloaded core partners. In the presentation, the development of a prototype of a DM50-ENP Nanowire Printer has been highlighted. The printer can be used for making conductive and transparent nanowire structures, patterns and substrates. The carrier application in the project was an electrohydrodynamic pump for use in lab-on-a-chip and other microfluidic devices. Furthermore, the integration into industrial coaters as well as the business perspectives have been presented.

It is well known that electronic products, such as chips, are being made with ever smaller dimensions for offering ever more performance. A similar drive to go smaller exists in the printer industry. This includes the area of printed electronics. It is possible to print electronic structures on flexible substrates, such as labels for food packaging. As in conventional electronics, making such structures with smaller sizes brings better products.

This is why the German partners microTEC, Coatema, and the Dutch partners DoMicro, tec-V and TechToBizz have launched the E-Nanoprint-Pro project. In this project, which has been carried out within the scope of the RocKET Reloaded program, the partners developed and tested a printer with a novel technology for printing wires with nanoscale dimensions. The technology is based on the so-called electrohydrodynamic effect. Basically, this is about using an electric field for pulling an inkjet into a very narrow shape. This effect can reduce the line width from about 30 microns, as can be obtained with industrial inkjet technology, down to 1 micron or less.

figure 1. principle of a set-up for electrohydrodynamic printing

A main subject within the project was the preparation of an insulin pump for placement inside the body of diabetes patients. Obviously, such a pump needs to be as small as possible. This is where miniaturisation of the connection wires, as enabled by nanoprinting, can help a lot. The idea for preparing such a pump already existed at microTEC. In the E-Nanoprint-Pro project, the Dutch partners prepared and tested a prototype of a printer based on the electrohydrodynamic effect. Meanwhile, microTEC made great progress with preparing and testing prototypes of the pump. The combined efforts within the consortium brought important steps ahead towards the future use of an insulin pump inside the body.

Once printing on nanoscale is possible, many other interesting applications in printed electronics come up. An important one is the replacement of scarce and polluting materials for touch screens by clean and readily available materials. For this application the printer must be suitable for industrial environments. This is a big challenge, given the fact that printing on nanoscale is very new while printers for industrial applications need to be very robust and reliable in a continuous manufacturing process for very large quantities of products. Within the E-Nanoprint-Pro project, the new printer prototype has been tested on a continuous coating machine at Coatema. The trials were successful and showed that the new printing technology can be scaled up for industrial environments.

The project has brought great steps ahead. On a short term, the DM50-ENP Nanowire Printer can be made available for experiments in research laboratories. For the longer term, the consortium partners have learned which applications are possible and what is needed for the realization.

A key enabler for these results was the cross-border cooperation. First of all, in the cooperation several applications were highlighted for which nanoprinting offers a solution. In hindsight, it feels like a very logical step to establish a cross-border cooperation like this one since at the different sides of the German-Dutch border many companies are active in comparable industries while being sufficiently different for making a combined effort very useful. Therefore the consortium intends to continue the cooperation on the journey towards offering nanoscale solutions for megascale challenges.